x Thank you for submitting an inquiry. We will get back to you as soon as we can.
x

Note: These example itineraries are fully customizable. We tailor all our luxury Sicily vacations, so you can include any location or activity that you desire. Let our Italy experts help craft your ideal complete Sicily vacation and take the stress out of luxury Sicily travel - contact us today! 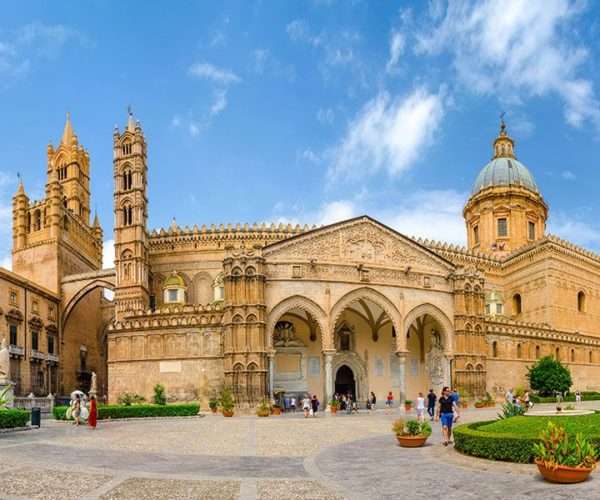 Discover the iconic sights of Palermo on a private guided tour with an expert guide. On this private VIP experience, our expert guide will meet you at your hotel before taking you on a journey of discovery through the most glorious parts of Palermo. As a part of this special day, you will have the chance to see all of Palermo's main attractions and stunning Baroque architecture, including Piazza Politeama, Teatro Massimo, the Quattro Canti, the Cathedral, the Martorana, Piazza Pretoria, the Palatine Chapel, the Norman Palace and the popular markets. During your cultural walk, there will be plenty of time to ask your private guide questions and learn more about the history of Palermo and its charming culture.

Overlooking the Golden Valley (Conca d’Oro) on top of Mons Regalis, the medieval village of Monreale is known for its magnificent Cathedral, which features some of the most beautiful religious mosaics of the 12th century. The Cathedral is considered to be one of the best examples of Norman architecture in Sicily and is a joy to discover on this small-group day trip from Palermo. As well as the Cathedral, you will have time to explore the abbey cloister, which boasts more than 200 intricate double columns decorated in glass mosaic. 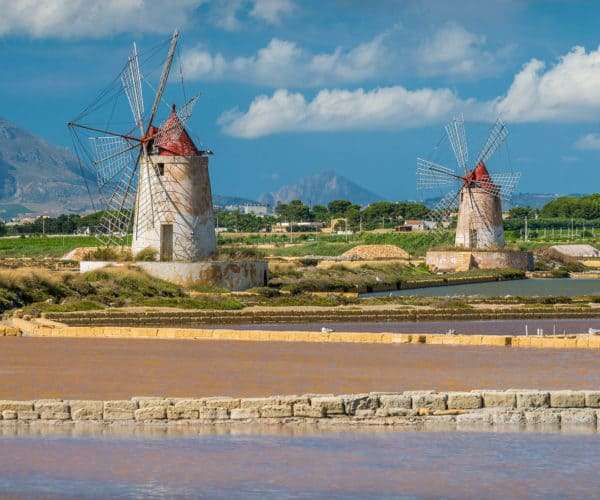 Excursion to Segesta and Erice

Enhance your sightseeing experience of Sicily on an enriching full-day excursion to Erice and Segesta. First, you can delight in the medieval majesty of Erice, a walled town that reigns over the picturesque harbor of Trapani, where you can delve into the historical wonders of one of Sicily’s most in-demand destinations. Through the eyes of your expert guide, you will become acquainted with the city and its key landmarks on an in-depth history tour with the chance to also hike along the coastal reserve.

Next, you will discover Segesta, one of the major cities of the ancient indigenous Elymian people. Here you can visit the Doric temple, which dates back to the late 5th century BC. It was built on a hilltop just outside of the ancient city and has a commanding view of the surrounding area. If anyone needed yet more proof that the Greeks had a good eye for where to build, Segesta would lay any doubts to rest once and for all! Indeed, the setting of the temple is simply beautiful as completely unspoiled rolling green countryside stretches right down to the glistening aquamarine sea.

Wine tasting in Marsala and Selinunte

On this VIP excursion you will be picked up by our private driver at your hotel and leave for Marsala, which was once known as Lilibeo and was founded by refugees fleeing the destruction of Mozia. It was conquered by the Romans at the end of the First Punic War and became a luxurious town featuring glorious palaces and thermal baths. The Arabian settlers called the ancient city Mars-Alì (“the harbor of Alì” or “the big harbor”), but it is now known as Marsala. The modern city is known for its world-famous Marsala wine, as well as for the landing of Giuseppe Garibaldi in 1860. On our private adventure, you will discover all the best sights, including the Archaeological Museum and the Salt Road with the Salt Pans. You will also stop in a winery for Marsala wine tasting before reaching Selinunte, an ancient Greek city in the widest archaeological park of Europe. It was founded in the 7th century BC but was destroyed in 409 BC by the Carthaginians allied with Segesta, its eternal rival. The two most important areas you'll visit are the Eastern Hill with the ruins of three temples, and the Acropolis where Greek and Punic ruins are still visible. 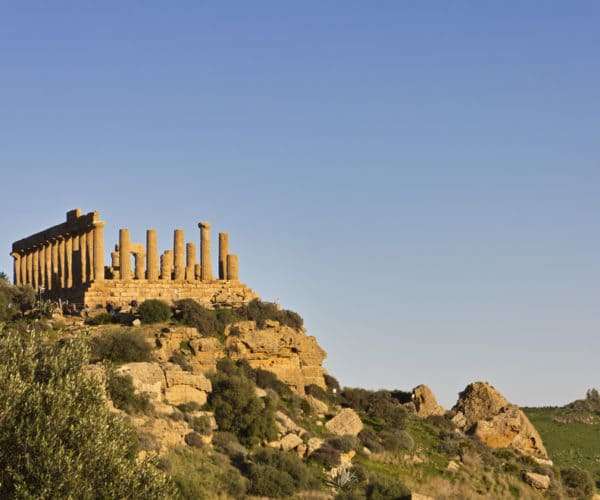 Valley of the Temples tour

Immerse yourself in Sicily's Greek past with this tour of Agrigento's Valley of the Temples (entry included).

The UNESCO-protected Valley of the Temples is one of Sicily's most important archaeological sites and is a joy to discover if you have an interest in history or simply want to learn more about Sicily's turbulent past. This tour experience takes you to the sacred site, where an expert guide will treat you to a guided walk through the Valley. 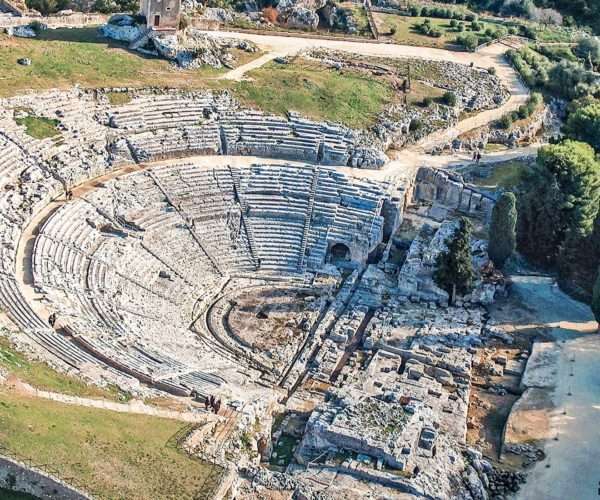 Enjoy a private tour around the historical center of Siracusa with this VIP experience on the ancient island of Ortigia. This private walk begins at the ancient Greek Apollo Temple and leads you to Cathedral Square, which boasts beautiful limestone buildings and Baroque architecture. From here, you will visit the Arethusa Fountain, which is steeped in legend and mystery - your guide will tell you all its secrets! The tour concludes with a visit to the Jewish Quarter and Archimedes Square, where you can admire the Fountain of Diana, which was built in a Neoclassical style and is one of the most recognizable landmarks of Ortigia.

One of the most impressive archaeological sites in Sicily and a UNESCO World Heritage Site is the rocky necropolis of Pantalica, in eastern Sicily. This site is somewhat off the beaten track but certainly worth a visit on your complete Sicily vacation. Pantalica is a prehistoric site dating back to the late Bronze Age (from the 13th to the 8th century BC) and is famous for its necropolis, which features thousands of tombs dug into the overhanging walls of the Anapo Canyon. Pantalica is also famous for its breathtaking natural vistas and unusual wildlife. In fact, it is part of the revered Anapo Valley Nature Reserve, which is a paradise for trekking. 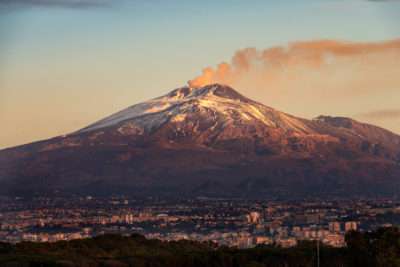 Scale the slopes of Italy’s famously active Mount Etna on this full-day 4x4 Jeep tour from Taormina. As a part of this unique experience, you will travel up rugged mountain tracks in an off-road vehicle and trek by foot to a stunning lookout point with views of lava flow basins and cave tubes created by the 2002 eruption. After descending from the volcano, you will enjoy a decadent and authentic Sicilian lunch of handmade cheeses, cured meats, pasta and dessert served with local wine.

Today you will discover Taormina’s historic secrets and modern delights on a two-hour private tour. This guided experience allows you to explore the highlights of this charming city, including Palazzo Corvaja, the Santa Caterina Church and Vicolo Stretto, which is the narrowest street in town. As a special addition to this Taormina tour, you will enjoy “skip the line” entry to the ancient Greek Theater, which boasts magnificent views of Mount Etna and Giardini Naxos. There is no better way to discover this unassuming city’s treasured attractions! 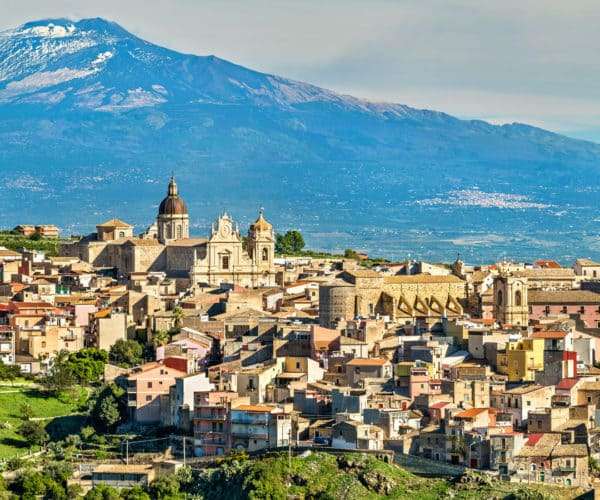 The scent of fresh lemons and oranges and the harmonized landscape of Mount Etna's cliffs rolling into the glistening sea set the backdrop for the sublime city of Catania. And on this exclusive tour experience, you will have every opportunity to discover the best of  Catania, including Piazza del Duomo, the Amenano Fountain, Castello Ursino, Teatro Massimo, Palazzo Biscari, Saint Agata Dome, Via Etnea, Piazza Stesicoro, which features a Roman Theater, and finally the Bellini Garden.

With our hand-selected local guide, who you can be sure knows where to find only the best Catania cuisine, you will begin this food-tasting experience with a historical overview of the city, including the intricate alleys and squares of Catania's old town, the ancient central market of Catania, Piazza Duomo, Via Etnea (the main street) and Piazza Stesicoro. But, of course, the most important part of this Catania food tour will be the opportunity to taste no less than 15 popular street foods that the city is famous for: arancino, cipollina, pizzetta, fresh fish, meatballs, local cheese, olives, cannolo with ricotta, cassatella, granita and much more!

Sicily’s second-biggest regional capital is the perfect place for a holiday, considering its cultural importance, its position and beautiful weather, and its enchanting views of past and present alike.
View all

Palermo is the City of a thousand faces, loud but elegant, eclectic and never dull, Palermo with its architectural beauty, its traditions and its people enchant visitors from all over the world.
View all

Taormina 'the Mediterranean Pearl', is situated on a natural sheer terrace above the sea. In the 1800s, praised for its beauty throughout Europe, Taormina became a mandatory stop on the Grand Tour
View all

x
x